Again, I return from a long blog hiatus, and I’m proud to say that I have officially completed my graduate degree. Now I’m happy to share some of the work that’s kept me busy these past few months. For my last class, I stepped into the shoes of a corporate communications leader. From financial communications to corporate social responsibility (CSR), corporate governance and issues management, we covered a lot of ground.

Given the broad applicability of these lessons, we began each class discussing the latest business news and also took turns posting more in-depth analyses to the DePaul Corp Comm Class Blog. I’ve included my analysis regarding TripAdvisor’s announcement of a new booking policy and education portal below. I believe their policy approach and launch communications hold valuable lessons for those involved in CSR strategy and communications planning.

TripAdvisor is showing it takes a community to make a change in more ways than one. On October 11, 2016, TripAdvisor, Inc. announced the company is undertaking two new measures to help “improve wildlife welfare standards in tourism” (press release, 2016c). First TripAdvisor and its Viator brand will stop selling tickets, and earning booking revenue, for animal attractions promoting human contact with endangered animals or animals in captivity, such as riding elephants, swimming with dolphins and petting exotic animals. The booking policy change will not affect attractions involving domesticated animals or educational attractions such as zoos or aquariums. The company has immediately stopped selling tickets for select attractions but will not be fully aligned with the new booking policy until early 2017.

Also scheduled for early next year, the company will launch a new education portal including information on animal tourism from various experts and welfare organizations, including the Association of Zoos and Aquariums, People for the Ethical Treatment of Animals (PETA) and Oxford University’s Wildlife Conservation Research Unit (WildCRU). Specifically, travelers will gain a better understanding of how captive animals are cared for as well as the potential impacts tourism has on the animal and broader conservation efforts. A paw icon will appear at the top of all animal attraction pages to promote visibility and access to the new education portal.

While TripAdvisor visitors will not be able to purchase tickets for attractions that are deemed non-compliant with the new booking policy, the community will still be able to view as well as contribute reviews for the attraction. Per the company, “TripAdvisor remains committed to its philosophy that travelers have the right to write about their travel experiences – be it positive or negative” (press release, 2016c, para. 14). The idea is better educated travelers will make better travel decisions and contribute better reviews to advance wildlife welfare. If tickets are not available for an attraction via TripAdvisor and reviews warn of poor treatment to animals, the traveler may choose to skip the attraction. This motivates the attraction operator to improve standards so they may garner better reviews and formally appeal to TripAdvisor to resume selling tickets. TripAdvisor President and CEO Steve Kaufer attested to this power in a LinkedIn post stating “We know from experience that the travel community can be the greatest agent for change within the industry” (2016, para. 15).

While the company is not the first travel site to make such an announcement, it is the largest. TripAdvisor operates sites in 48 markets and reaches 350 million average monthly unique visitors (About Us, 2016a). Per the Associated Press, “A San Francisco-based travel analyst, Henry Harteveldt, said because TripAdvisor is so widely used the wildlife attractions could see a noticeable hit to their business” (Pratt, 2016, para. 11). Richard Rees, director of the Maldives Whale Shark Research Programme, is counting on that hit, stating: “Out in the real world, TripAdvisor is often the only voice that really scares operators. I like that we’ll have visitors with the right expectations about what good practice is” (Rushby, 2016, para. 8).

I had to dig further into the “why” before judging whether this new stance and announcement were executed successfully. In TripAdvisor’s 2015 Annual Report, the company cites its primary risk as decreases in web traffic, which could make the site less attractive to advertisers (2016b, p. 11). Part of mitigating that risk, TripAdvisor must avoid bad publicity which “could have an adverse effect on the size, engagement, and loyalty of our user base and result in decreased revenue, which could adversely affect our business and financial results” (2016b, p. 13). The company does not specifically mention wildlife advocacy groups in its discussion of bad publicity, but the company has experienced harsh scrutiny. In particular, World Animal Protection (WAP) launched a campaign against TripAdvisor for promoting and profiting from cruel animal attractions. National Geographic contacted TripAdvisor for comment in early 2016 and at that time, “a company spokeswoman said it wasn’t TripAdvisor’s place to steer users in any particular direction with regard to animal attractions” (Bale, 2016, para. 5).

The company has since pivoted their somewhat neutral position with Kaufer claiming the realization that “there was more we could and should be doing as a business to promote better animal welfare standards in our industry” (LinkedIn Pulse, 2016, para. 5). However, the TripAdvisor team recognized they did not have the internal expertise to go it alone. In fact, “The decision… came after roughly six months of research and consultation with animal groups” (Sablich, 2016, para. 3). They engaged their critics to arrive at a compromise. The company would help increase awareness but would not remove the listings all together as it would be counter to the company’s mission. This emphasis on compromise will continue to be important as more extreme activist groups push for more. Condé Nast has already highlighted how “SeaWorld is not mentioned… Conservation groups have noticed this omission and hope that the new policy is just the first step towards an even larger initiative” (2016, para. 3). 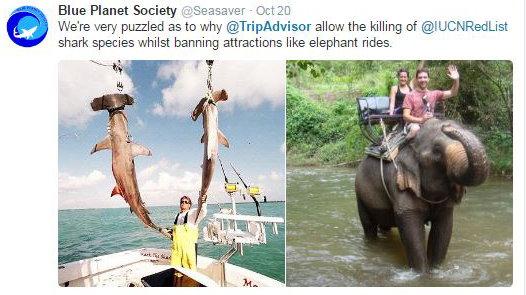 Overall, TripAdvisor’s policy and portal announcement strengthens strategy to squash bad press, reinforce company credibility and differentiate from competition. Some animal activist groups may claim it’s not enough, but a stronger stance may have driven away visitors, hurt operators or detracted from TripAdvisor’s purpose. Calling upon the Arthur W. Page Society’s Page Principles, TripAdvisor had to carefully consider its approach in order to successfully:

Prove it with action.

Rather than leaping out with empty statements of support, the company took the time to engage various experts and organizations in creating tangible solutions. I believe the company will also have to show some tangible results over the next year to further validate the solution.

TripAdvisor maintains its focus on building a thriving community to continue attracting advertisers and make their business viable. Creating a community requires attracting visitors and forming a relationship of trust to cultivate loyalty. Extending the company’s stance on animal welfare helps build credibility with the growing population that expects companies to be more than profit-driven.

Conduct PR as if the whole company depends on it.

TripAdvisor’s announcement reveals consideration for its various stakeholder groups. Its visitors are still able to review all attraction listings and operators are able to appeal to TripAdvisor if they were affected by the new booking policy. The company is helping improve wildlife welfare standards by working with businesses and organizations, rather than against them.

Did you have a different reaction? Feel free to share your thoughts in the comments below.

Kaufer, S. (2016, October 13). How TripAdvisor Will Do Our Part to Raise the Global Standard of Care for Animals in Tourism. LinkedIn Pulse. Retrieved from https://www.linkedin.com/pulse/how-tripadvisor-do-our-part-raise-global-standard-care-steve-kaufer

TripAdvisor (2016a). About Us. Retrieved from https://www.tripadvisor.com/PressCenter-c6-About_Us.html